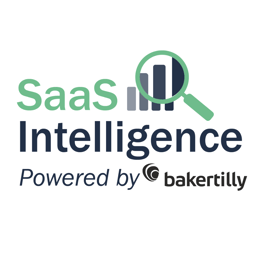 Houston, TX - AcctTwo, the largest team of Sage Intacct Developers and six-time Sage Intacct partner of the year, has announced the launch of their newly expanded SaaS reporting innovation called AcctTwo SaaS Intelligence. Built specifically for the needs of the Software as a Service (SaaS) industry and subscription-based companies, SaaS Intelligence by AcctTwo goes beyond tracking and visualizing SaaS key performance indicators (KPIs) and actually provides a level of granularity that will expose the levers company leaders can act upon to drive sustainable growth.

At a glance, SaaS Intelligence users see their most important SaaS KPIs like CMRR, CAC, CLTV, Runway in Months, and other unit economics that go undetected and unmeasured by many other comparable systems. With AcctTwo SaaS Intelligence, users can analyze Expansion and Contraction at a more granular level than ever before. For example, while other applications may track general “Contraction,” they lack visibility into the underlying causes of revenue retention issues.

Here is a 5-minute product video: “Our SaaS Intelligence product was developed based on our extensive experience working with hundreds of sophisticated SaaS companies all struggling to achieve access to SaaS metrics that were real-time, automatic, reliable, and insightful,” said AcctTwo CEO and Founder Marcus Wagner. “It’s what inspired us to change the name from the Advanced SaaS KPI Dashboard. SaaS and subscription companies needed more than a dashboard, they needed intelligence to truly know where to act to drive predictable growth or mitigate avoidable churn,” added Wagner.

“It’s what inspired us to change the name from the Advanced SaaS KPI Dashboard. SaaS and subscription companies needed more than a dashboard, they needed 'intelligence' to truly know where to act to drive predictable growth or mitigate avoidable churn.” Marcus Wagner, AcctTwo CEO and Founder

AcctTwo SaaS Intelligence tracks the renewal timing of existing CMRR value to provide a clear picture of the future. It accurately forecasts renewals of recurring revenue to provide greater predictability and achieve alignment with your Customer Success/Renewals team.

“Churn is an incredibly important and highly visible metric that drives a lot of a SaaS company’s activities, so it's important to get it right. The last thing you want to do is inflate Churn and have the business in a frenzy. At times, customers can be delayed in renewing, so SaaS Intelligence does not immediately move CMRR to Churn at the end of a subscription. Instead, we make the late renewal status of customers apparent to your business by tracking past-due renewals in ‘Pending Renewal CMRR,’ allowing you to keep a pulse on potential churn, but without forcing that decision prematurely. In this way, the business can appropriately and proactively address late renewals or customer churn risks,” said AcctTwo Head of SaaS Vertical Chris Price. 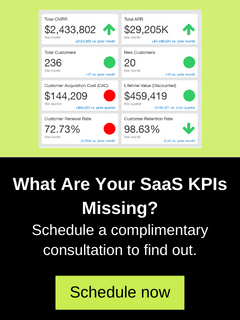 SaaS Intelligence exposes the distinction between Downgrades and Markdowns to illuminate product-related attrition issues versus sales price reductions and discounting behaviors. Both of these will result in Contraction, but knowing exactly what’s happening on which Products for which Customers enables more effective action planning because management teams now have actionable insights into what’s actually happening with the business so they know where and how to react.

The expanded product also automates the calculation and reporting of Foreign Exchange rate impact on the CMRR of multi-currency contracts. For example, where there are CMRR gains attributed to Foreign Exchange rates changing from the time of contract inception to renewal, AcctTwo SaaS Intelligence actually shows the Foreign Exchange fluctuations and exactly how much they are hurting or helping CMRR growth.

Built on the best-in-class Sage Intacct architecture, SaaS Intelligence by AcctTwo completely automates the tracking and bucketizing of crucial SaaS metrics by interpreting transactions in real-time as they post, analyzes the activity, and automatically categorizes the CMRR into the appropriate bucket without requiring any user involvement. SaaS Intelligence by AcctTwo is the only product that tracks your metrics across both the Sage Intacct Contracts and Order Entry Subledgers simultaneously. Sage Intacct users with transactions flowing through the Contracts module, as well as through Order Entry from an external billing system or ecommerce site will be able to view subscription details across modules, interweaving the data to give them the full picture.

Click here to learn more about AcctTwo SaaS Intelligence and to watch a 30-minute product demo.

AcctTwo is focused on delivering the future of finance and accounting to its customers. AcctTwo has three main solutions – Cloud Accounting Software, Managed Accounting Services, and Software Development, all built around Sage Intacct’s best-in-class financial applications. Our dedicated team of over 100 people has helped nearly 1,000 organizations optimize finance and accounting through software implementations, accounting outsourcing, and consulting. AcctTwo has been recognized by Sage Intacct as its Partner of the Year from 2014 – 2019 and by our customers as a leader in overall satisfaction and popularity through their reviews on G2.

Alyssa Nunez
Sales Development Representative
Tel: 713.744.8472
If you'd like to find out how much time you can save with AcctTwo SaaS Intelligence, we urge you to schedule a meeting with our experts today!

Marcus is the founder and CEO of AcctTwo, a services and technology company delivering the Future of Finance and Accounting to nearly 1,000 organizations throughout the country. Marcus and his team have firsthand experience implementing the processes, controls, and technology needed to optimize financial resources, no...

How to Spur Growth & Attract Investors with an Automated SaaS Dashboard

During the last 20 years since Salesforce first launched their CRM, they...
SaaS saas intelligence

Accounting systems that rely on manual processes, spreadsheets, and...